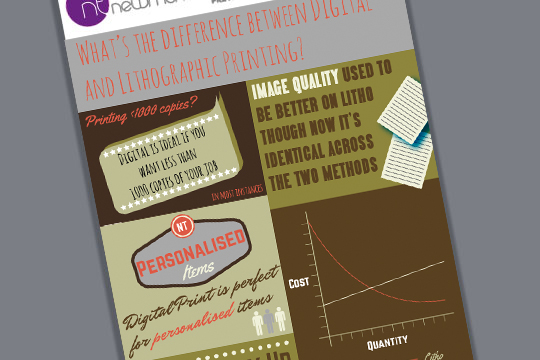 Digital print has come a long way in the last few years, however it does still differ from Litho in a number of ways, click on the image below to see our differences between Digital and Litho info graphic. Originally deemed inferior to litho printing, digital has now truly come of age and the difference in most cases is indistinguishable in terms of quality to litho. There are of course still advantages to using litho, the main one being speed, and the fact once you’ve hit the point where litho becomes economical, it represents very good value for money. Digital is more suitable for shorter runs and Litho for longer runs. We have already established that digital is more cost and time effective on shorter run jobs, and that the quality of print is pretty much equal to that of litho. So, what else differentiates the two then?

Digital tends to produce a single copy of a file, so if you have a 28pp self cover document of which you want 100 copies, a digital press will produce 100 collated copies of a 28pp document, which will then need binding, and any other finishing (trimming etc.).

A litho press would produce 100 copies of the first sheet (so OFC, IFC, OBC and IBC) then 100 copies of the next sheet, and so on, which would then need collating, followed by whatever finishing was specified by the client.

Litho printing requires plates being made to transfer the image to the paper, a digital press simply uses a file to print from much like you home desktop printer, though obviously on a totally different scale.

Downtime between jobs and set-up times are much less on a digital press.

Most litho presses can run down to around 90gsm stocks if you wanted them to, and up to 450gsm, the digital presses tend to run around 115gsm lowest and up to around 350gsm.

There are specific stocks designed for digital and litho printing, though increasingly more stocks are compatible across both methods.

This is where digital has an advantage, a digital press can produce decent quality images from a 150dpi file, a traditional litho press would need 300dpi minimum to create the same results. Whislt this doesn’t mean you can print web graphics at an acceptable level of quality, it is a little more forgiving.

It is worth considering that if you plan to overprint the job (i.e. it will be going through another printing process such as a desktop printer) then some digital press processes are not compatible as the image will be melted in the process.

This makes each print a unique print and as such is most suited to Digital printing. The use of this service will considerably increase the return on investment and response rate for mailing campaigns compared with the shotgun approach.

To learn more Wikipedia has this to say about digital printing.